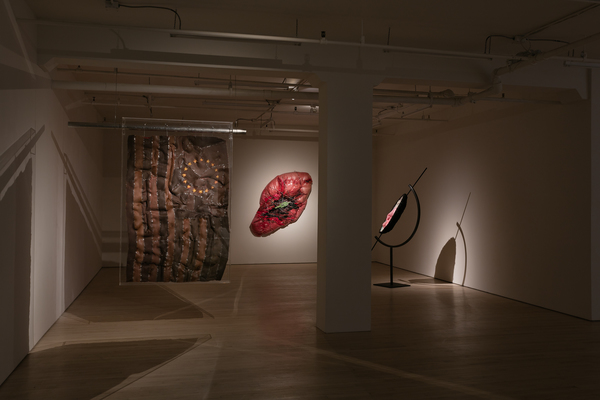 JTT gallery is pleased to present its first solo show with Doreen Garner titled, She Is Risen. In an open and intentional engagement with the twinned miracles of mortification and resurrection, the show opens on Easter Sunday, April 21, 2019.

Garner’s sculptures glisten with oscillations between female body and flesh. They shimmer; they fold and curve and seem to sweat. Her renderings of bodies move beyond representations of weight, color, and texture to reveal luminous subdermal layers of fat and muscle. They call attention to what philosopher Hortense J. Spillers describes as the “arrangements of gender,” through which gender itself is shown to be a product of an intimate relationship between race, power, and recognition.

Cloth covered in short, curly black and dark-brown hair is stretched around a working gramophone in an echo of the black women’s bodies that were made to open and open again under the gaze of prying gynecologists like James Marion Sims and Nathan Bozeman in the late nineteenth century. This performative sculpture is based on the completion of a circuit. When activated, it fills the gallery space with a sound recording of the arrest of Sandra Bland, which eventuated in her death in a jail cell days later. The gramophone’s horn, swathed in synthetic black hair, forces a reckoning with the resonances of the organic in the mechanical that calls to mind David Hammons’s insurgent practice.

Henrietta Lacks—an African American woman from Baltimore, MD whose cervical cancer cells were harvested without her consent or awareness and remain widely used in medical research decades after her death in 1951—also features prominently in the show. A large-scale sculpture depicting Lacks’s irradiated cervix is a focal point. Hardened layers of iridescent pink expandable foam are built up into an irregular elliptical shape. Strips of rose-colored silicone collaged onto the sculpture’s surface are interrupted by glossy bands of black, representing the charring effects of radiation tubes used in Lacks’s treatment. Light reflects off metal pins embedded neatly in the work in bright, tiny points. But the interior of Lacks’s body is not simply presented as an inert anatomical mock-up or a thing worthy of only revulsion. Instead, Garner’s framing of the body on display makes the site of exploitation compelling to viewers. The work’s large scale and warm colors render even the delicate threads of barbed wire intriguing. It solicits us to look closer, to draw near. As we do, we are—every one of us—implicated as witnesses to the unfolding history of a black woman made into a medical spectacle.

Garner deftly wields this mixture of allure and ritual. She applies common and specialized supplies with regularity and abundance: craft beads and pearls; thousands of metal staples; surgical clamps; and the platinum-catalyzed soft silicone used to make popular sex toys. The pieces shine, they undulate transforming a dark, complicated and repulsive history to an approachable one. This strategy is clearly at work in Betsey’s Flag, a silicone American flag comprised of alternating bands of brown that resolve, on further inspection, into strips of dark female flesh. The title of the work refers both to Betsy Ross, as well as Betsey, one of the enslaved women on whom Sims performed unanesthetized experimental surgery.

Garner’s Olympia likewise refigures the sitters in Edouard Manet’s iconic painting as isolated bodily parts. Signifying on Manet’s Impressionistic flattening of the surface, this piece offers an even more distilled image: a three-dimensional silicone cast of a model’s pelvis rests on a shelf near a bouquet of pink flowers made to replicate disembodied vaginal canals. The French prostitute and her black maid are reimagined as parts standing in for wholes. We might wonder whether Manet’s original derives at least part of its visual force from the implication of this very reduction. If so, then Garner’s surrealist revision leaves us without the ideological cover of the Western art historical canon to obscure the intersecting forces of gender, race, sex and power at play in the earlier painting.

She Is Risen proposes what Garner names as a “resurrection”, a subtle reiteration of a haunting and haunted scene. Black women’s bodies and flesh remain as the central but unsettled terrain of the artist’s imagination. She invites us to consider and to behold the terrible beauty of a history—our history—that wounds. — Nicole Ivy 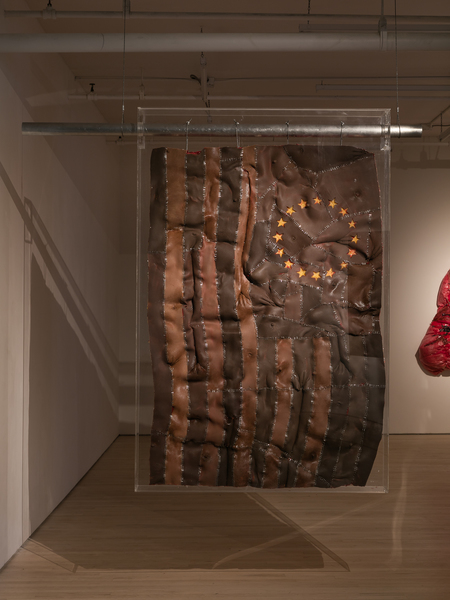 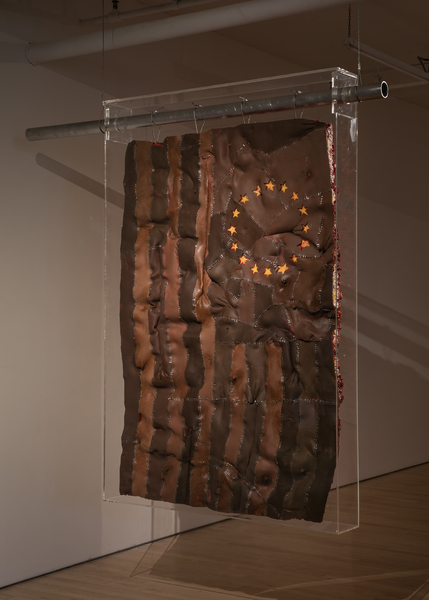 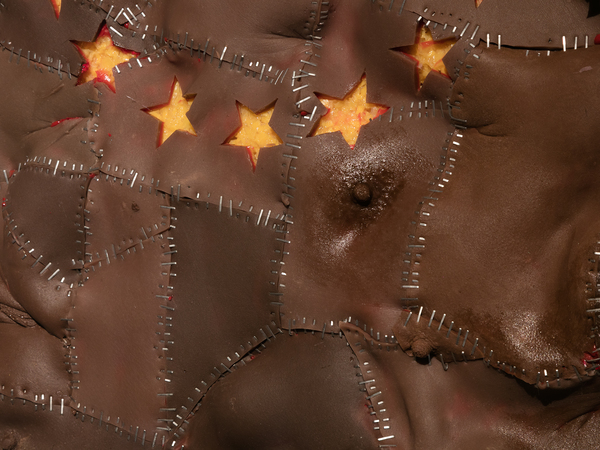 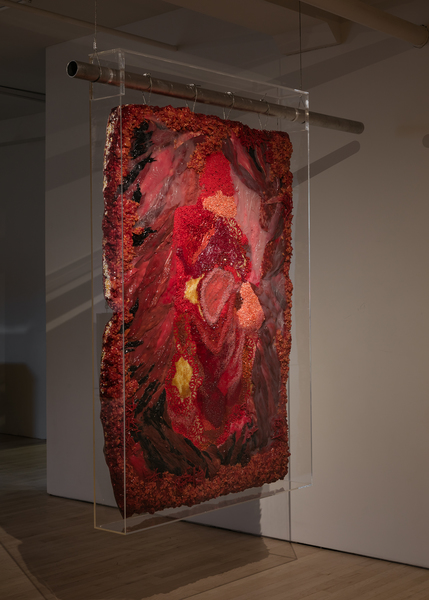 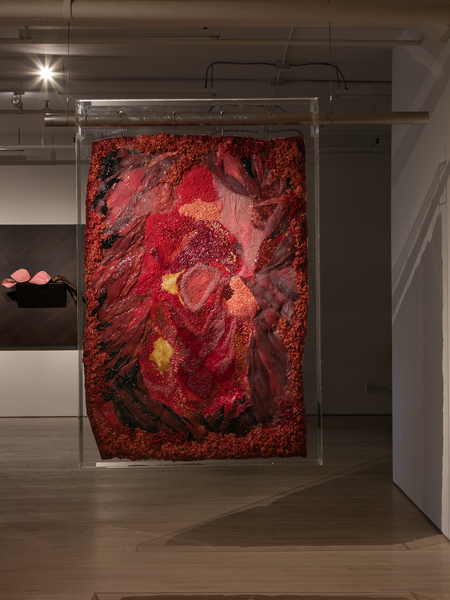 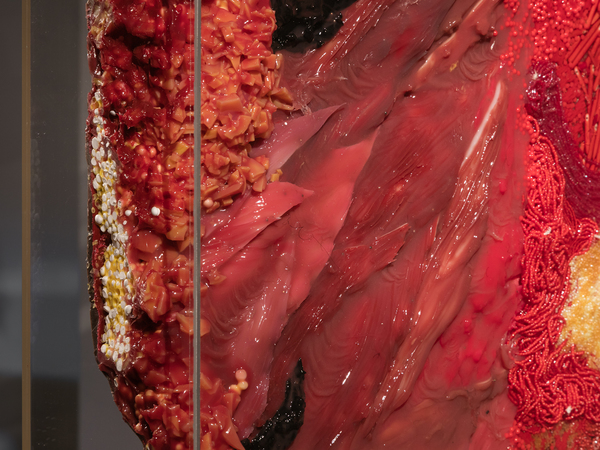 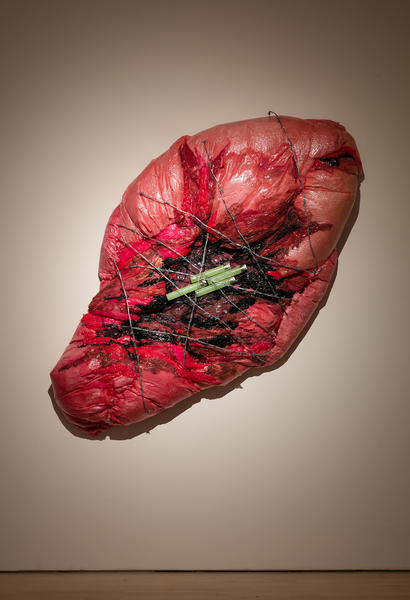 Henrietta: After the Harvest, 2019 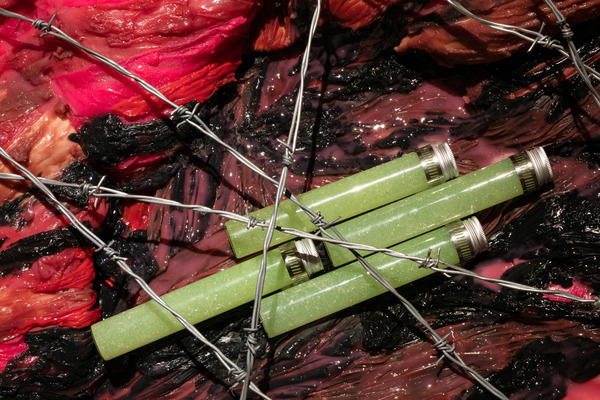 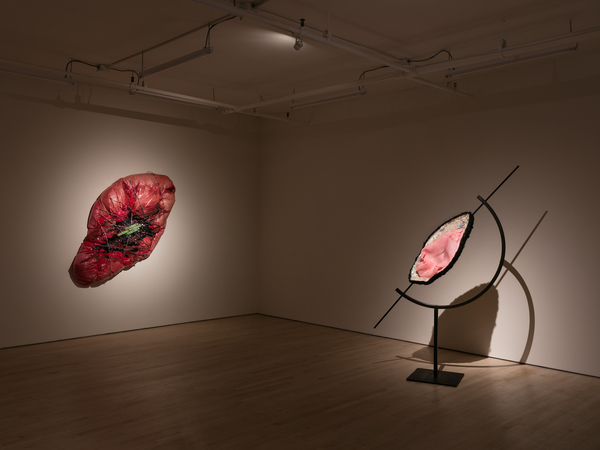 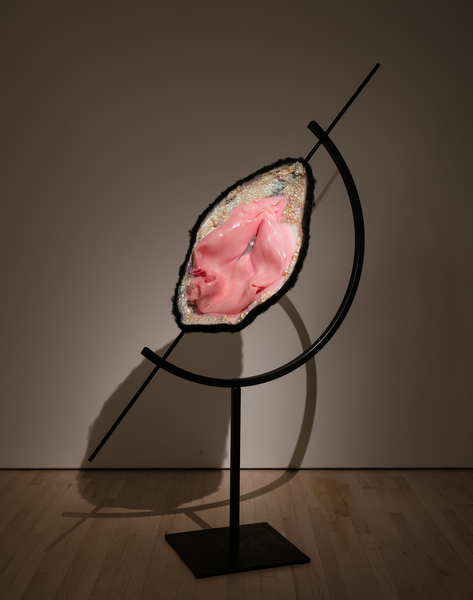 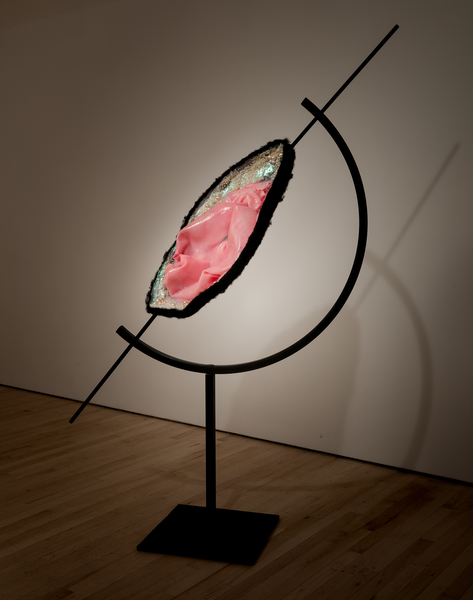 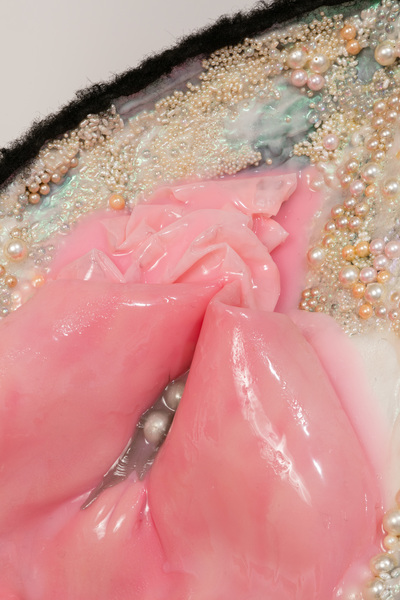 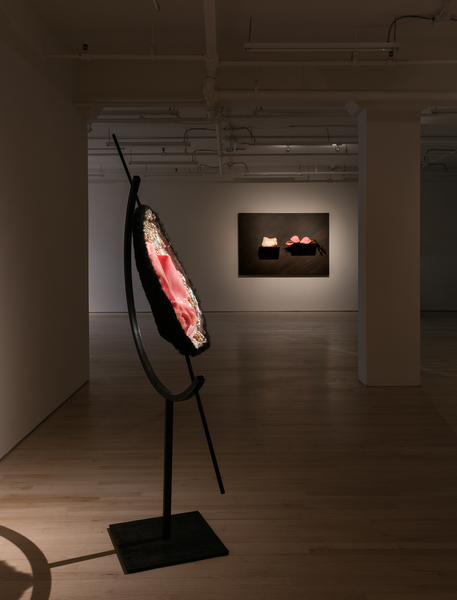 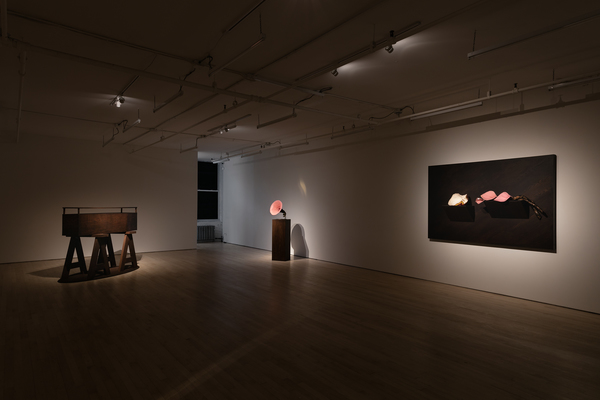 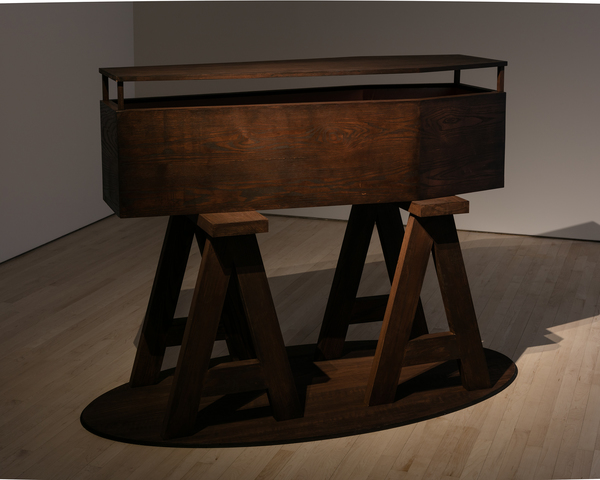 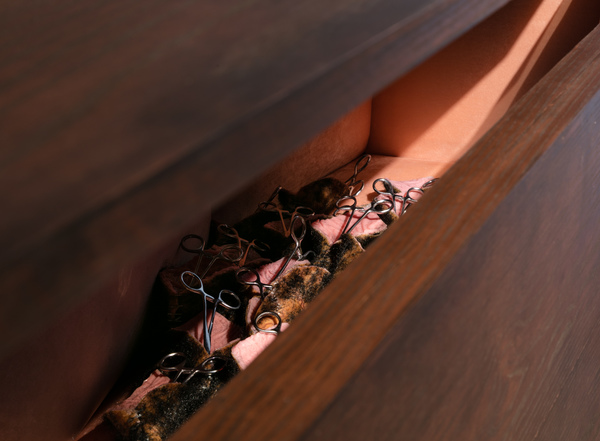 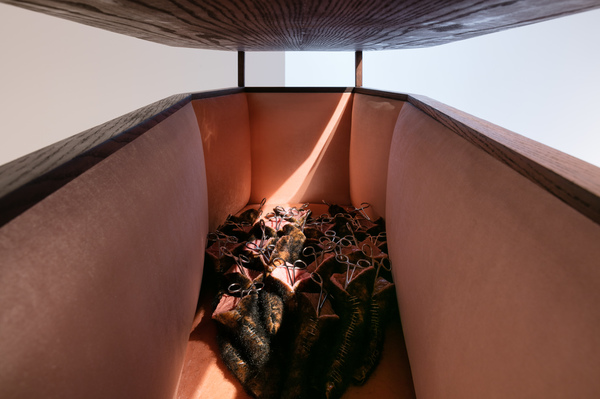 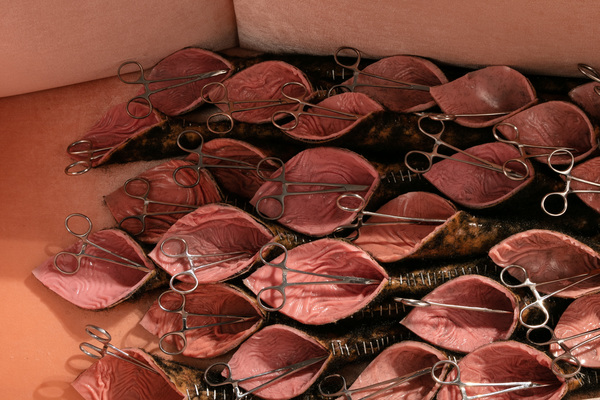 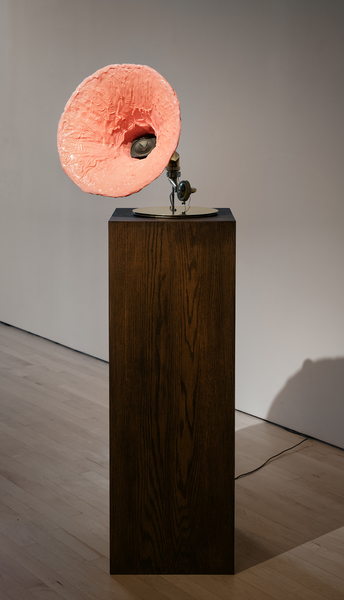 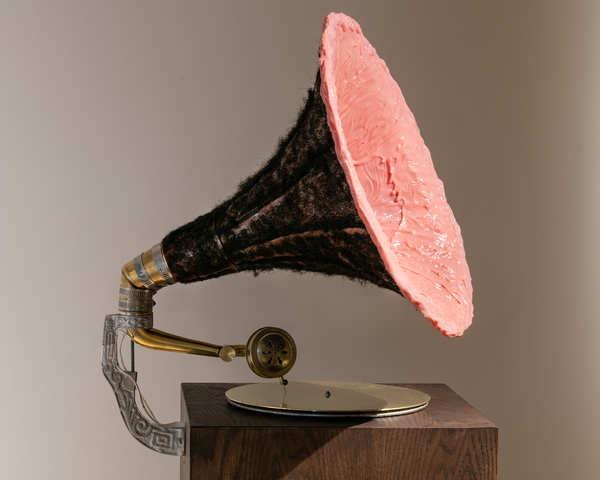 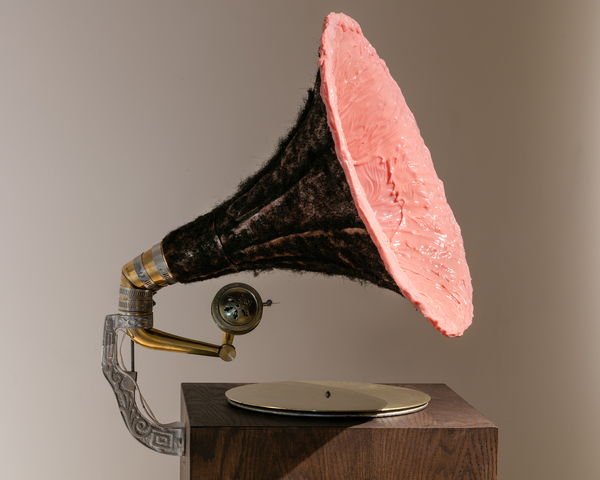 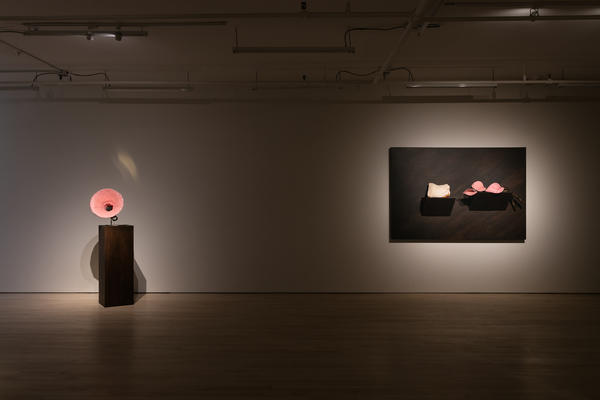 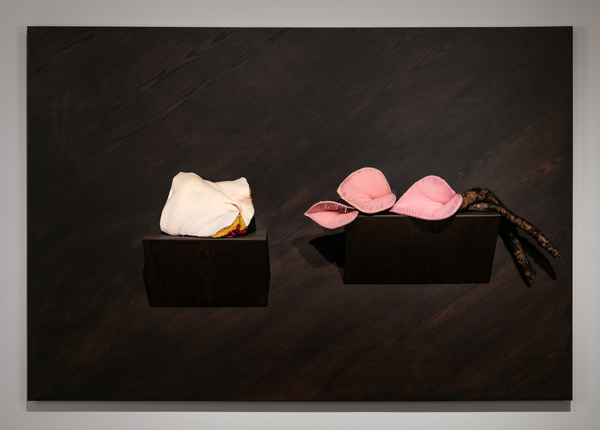 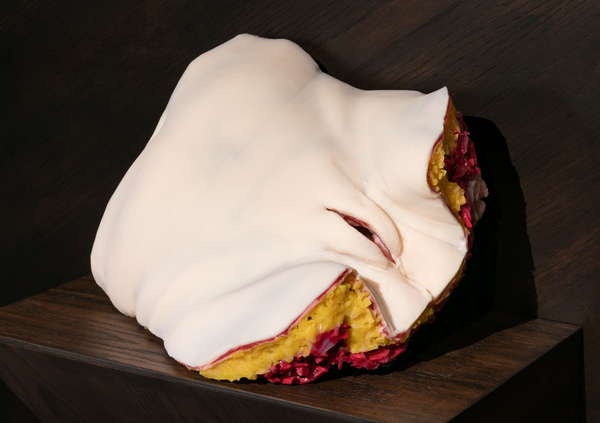 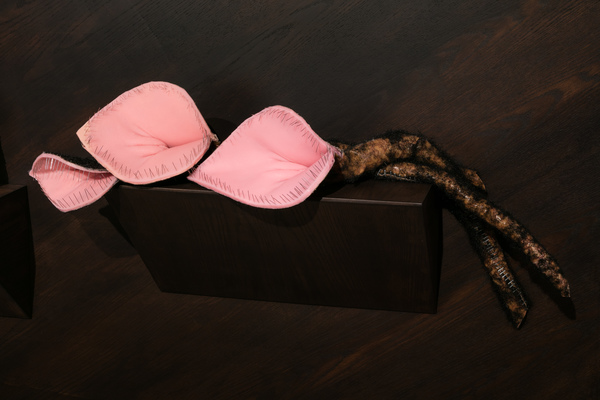