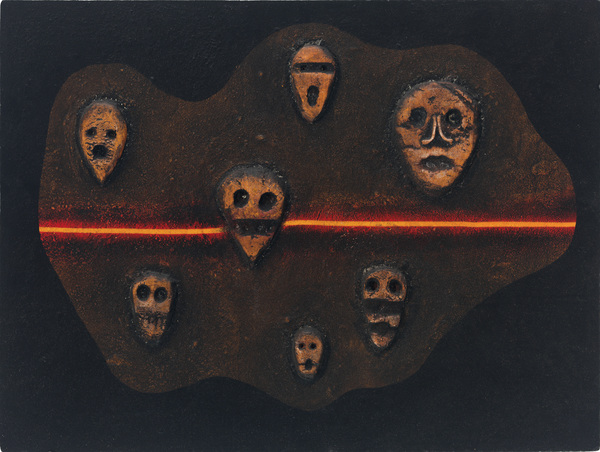 JTT is pleased to announce its first solo exhibition with Dominick Di Meo (b.1927, Niagara Falls, NY). This selection from Di Meo’s prolific 70-year-long career traces his work from Chicago in the early 1950s, to Italy between 1961 and 1963, and finally to New York where he would live from 1969 to the present.

In the late 1940s, Di Meo moved to Chicago and become part of a community of artists that included Don Baum, Cosmo Campoli, Leon Golub, June Leaf, Irving Petlin, Nancy Spero, Evelyn Statsinger, and H.C. Westermann among others. At the time, these artists shared a distinctly post-war skepticism of the violence of Western civilizations and used expressive figuration to reflect the existential solitude of humanity in a dehumanized world. Di Meo’s “Untitled,” 1952, the earliest piece on view, is a small wall relief of bronze colored heads floating in a dark expanse with a vibrant flash of red scored across the horizon. This use of color and figuration is a strong example of the work coming from this group of peers during this time period. In 1959, art critic and historian Peter Selz used the term “Monster” to describe what he was starting to see as a movement unique to Chicago and today these artists are referred to as the Monster Roster.

In 1961, Di Meo, who was born to Italian immigrants, traveled to Italy for the first time and lived there for two years. “Birds of Prey” and “Giant Head,” both c.1962, were made during his time there. Both were made with a filling compound, referred to in Northern Europe as Swedish Putty, which he pressed into the burlap in layers. The influence from Jean Dubuffet, Jean Fautrier, and Louis Pons is readily apparent but so is that of Kathleen Blackshear, Di Meo’s professor at the Art Institute of Chicago who emphasized non-Western Art throughout her syllabus and supplemented class trips to the Oriental Institute, the Shedd Aquarium and the Field Museum of Natural History. Like Di Meo, fellow students at the Institute often experimented with new ways of manipulating common industrial or fine art materials. Specifically, Di Meo was impacted by the relief works of Eldzier Cortor, a WPA artist and a 1936 graduate of the Art Institute who was known for making his own black oil paint in order to reach a desired darkness. Both Cortor and Di Meo would have been as influenced by artifacts found in the Field Museum as they were by the European paintings that hung at the Art Institute. The rough surfaces of Di Meo’s “Birds of Prey” and “Giant Head” are inspired by Aztec architecture and Art Brut equally. Apart from these influences, Di Meo had a dark sense of humor that can be seen by the wry smile in “Birds of Prey” creeping onto the torso cum disembodied head.

At the age of four, Di Meo contracted polio and spent the next four years in a children’s ward as he battled the disease. In the early 1930s, doctors used a method of treatment that involved strapping patients’ limbs down so that they were unable to move. It is now widely understood that limiting a range of motion in this way in fact harms the patient and may have contributed to Di Meo’s lifelong difficulties with mobility. Nonetheless, young Di Meo spent the better part of four years constricted motionless in a bed while he witnessed children his age suffering all around him. The experience that appears to have had the deepest effect on Di Meo was witnessing the periodic removal of the bodies of those infants and children who didn’t survive. The young corpses were placed into black plastic bags before being removed in the middle of the night, but Di Meo saw much of it from a window by his bed. Throughout his career, dismembered and truncated images of the body continually re-occur, and often in dark, nighttime expanses. Di Meo confronted this memory throughout his entire life, constantly attempting to reconcile these haunting images with a dark and sinister humor.

In 1964, Di Meo returned from Italy to Chicago. Here he made “The Somnambulator,” 1964, and “Somnambulator,” 1965. That same year the Vietnam War began and Di Meo became highly involved in protesting the politics of the Lyndon B. Johnson administration. These works reflect much of the somber political climate of the time. In all three compositions, the figure is disembodied into heads and limbs floating in a deep sea of black. Their edges touch each other slightly or not at all, reaching for each other with the infinity of asymptotes. “Night Jogger,” 1967, one of the few examples of vibrance and saturation in in a mostly monochrome career, has two bright blue socks and two bright green heads on an expanse of black. The title makes reference to a lonely figure in the night, or perhaps being confronted by one. One of the heads has a swath of string wrapped around its mouth as if to silence it.

Di Meo moved to New York in 1969 where he returned to monochrome work. “Night Phase (for Whitney Halstead),” 1973, pays tribute to his former classmate who would later become a beloved professor to many of the Chicago Imagists. Di Meo knew him before he became a historian, at a time when Halstead was still practicing art, making rubbings and frottages that Di Meo found remarkable. The surface of this work from 1973 is a tribute to the way in which Di Meo remembers Halstead as an artist.

In the later part of this same decade, Di Meo focused his fixation on human heads, creating thousands of small, skull-like spheres out of white putty. The works on view made between 1979 and 1991 feature these heads strung together in a silent chorus ornamenting small tableaus. “A Study For A Monument,” 1979, features a large head resting before an opening in the wall. Its mouth is open but silent, recalling the young Di Meo by his window at the polio ward. 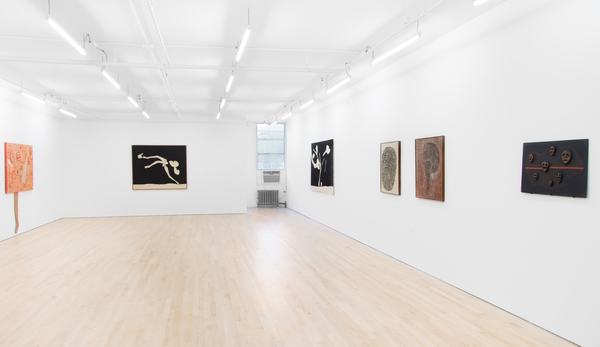 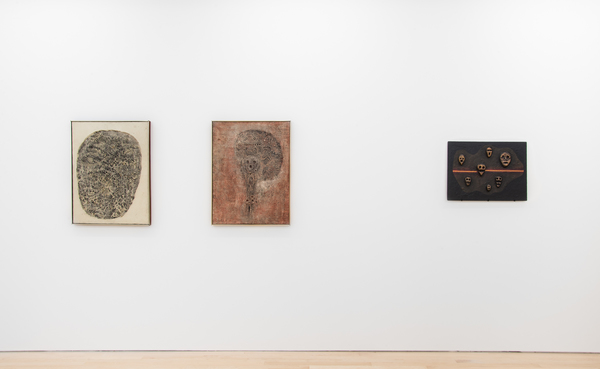 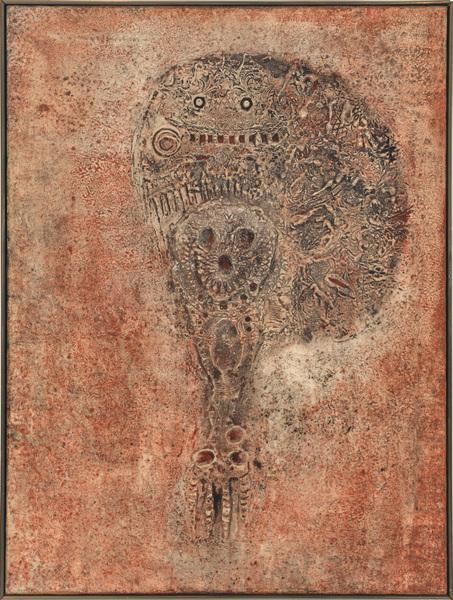 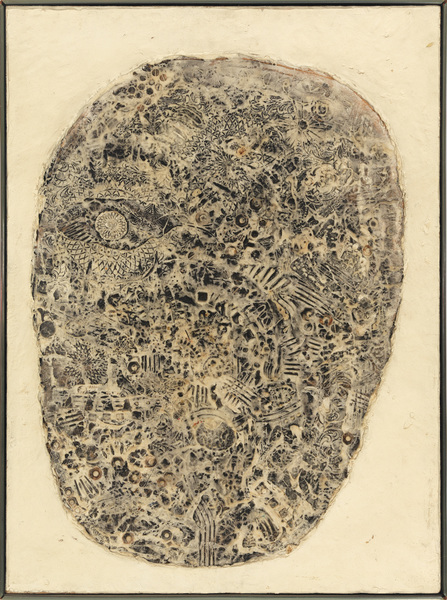 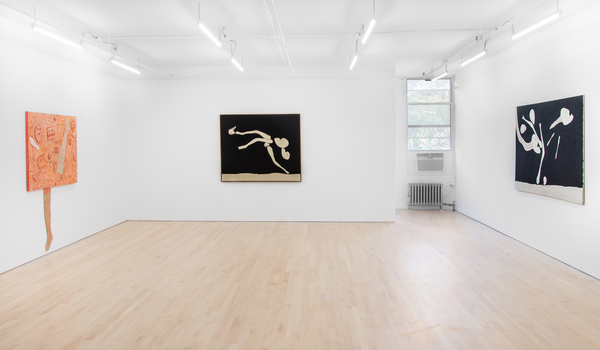 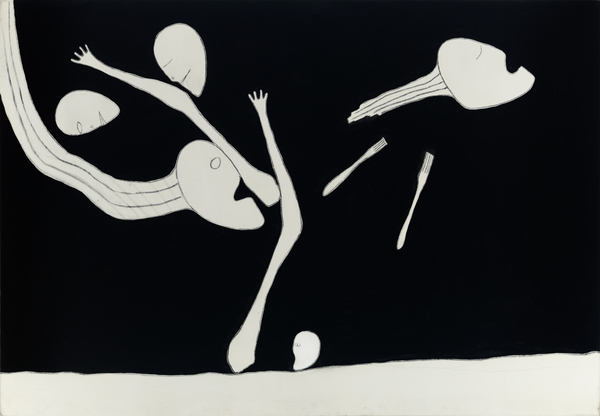 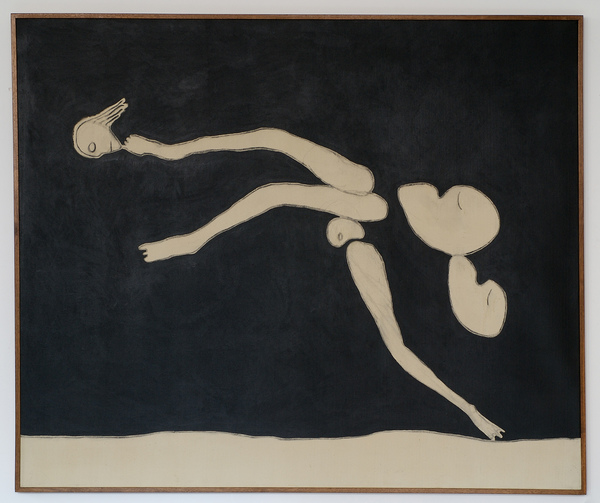 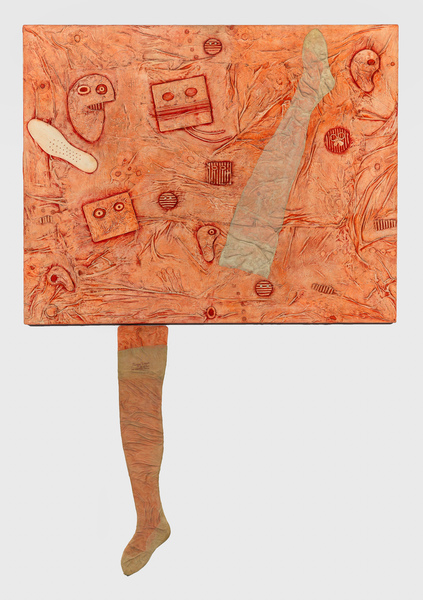 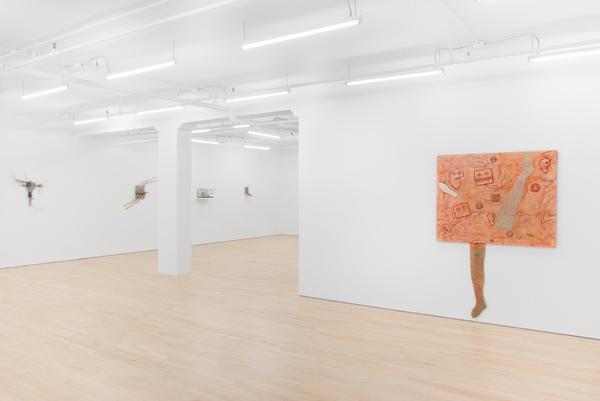 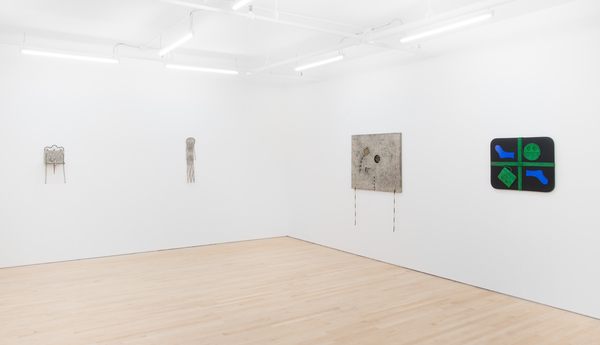 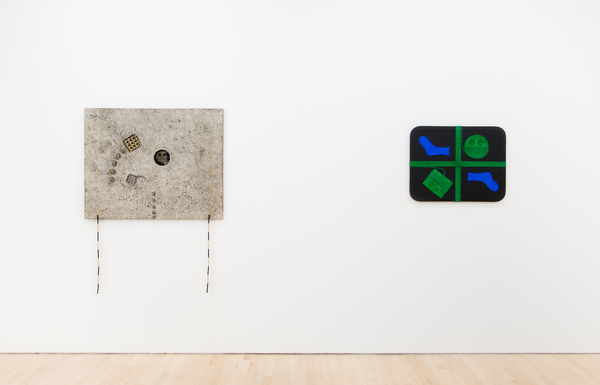 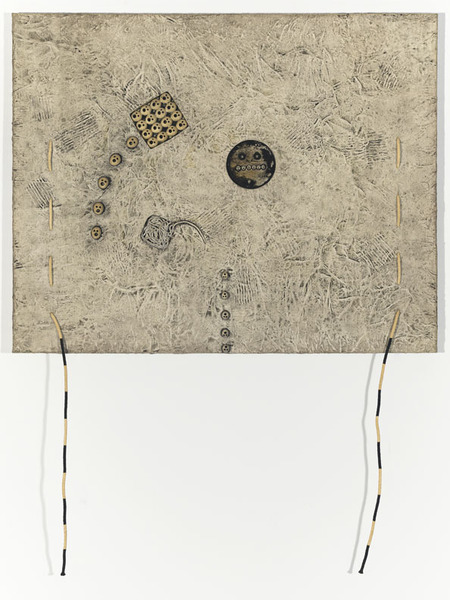 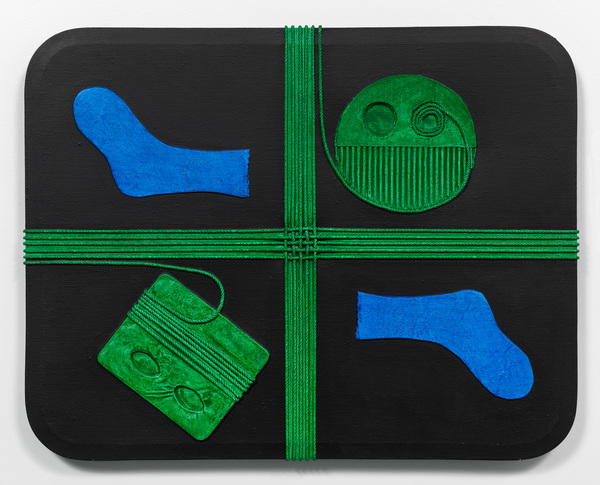 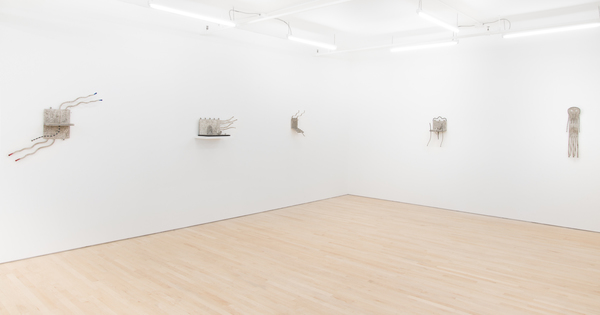 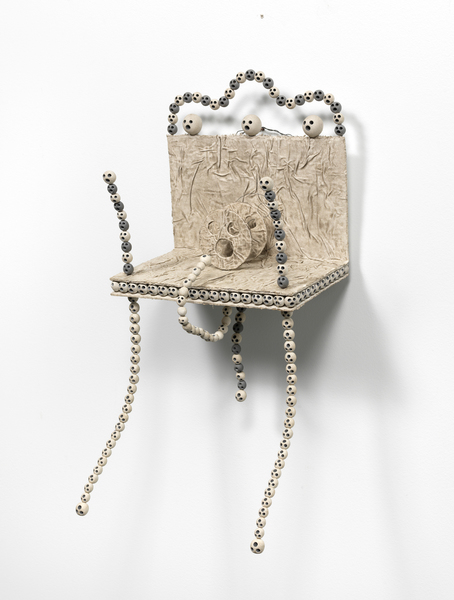 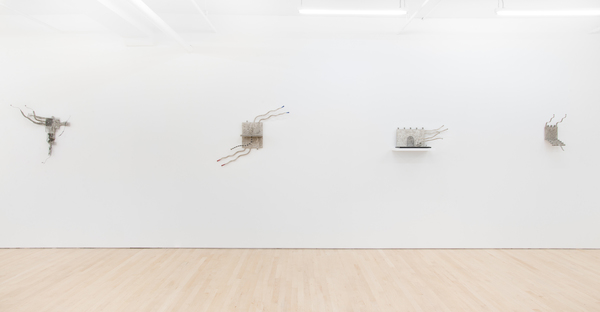 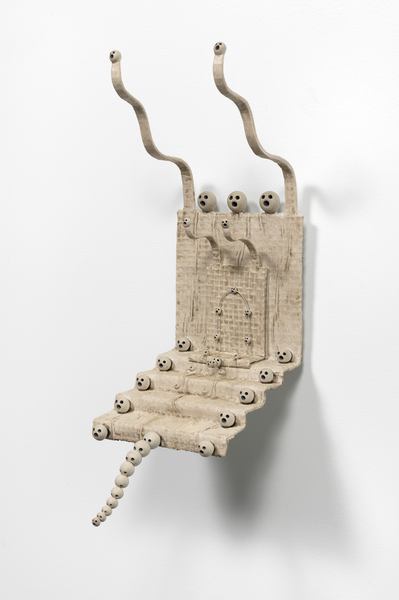 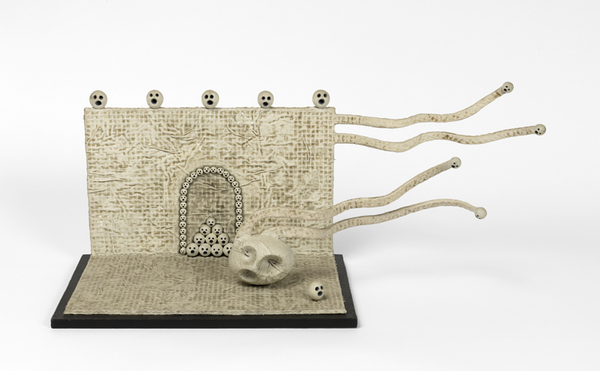 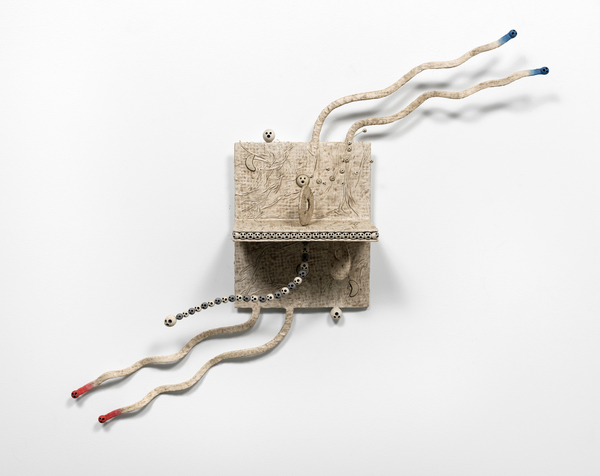 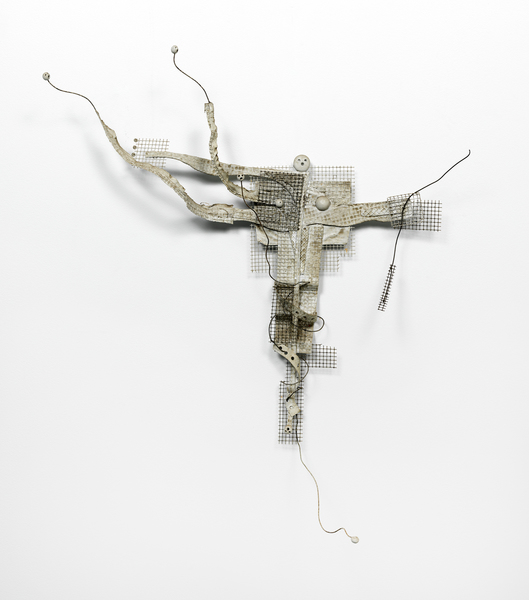