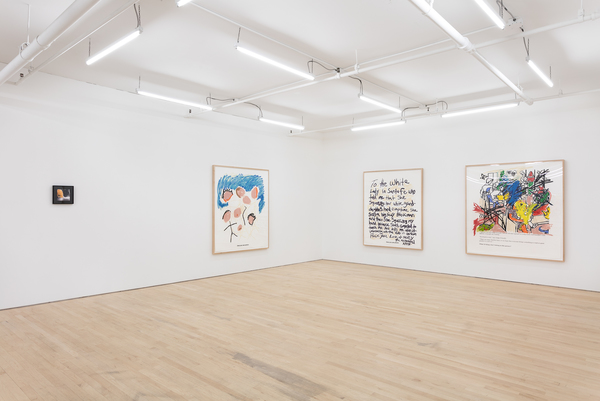 JTT is proud to present BOLO: Be On (the) Lookout, the gallery’s first solo exhibition with New York-based artist Sable Elyse Smith (b.1986, Los Angeles, CA). Smith’s practice interrogates the predatory nature of the US carceral state and how the concepts of innocence and guilt in the larger cultural context perpetuate carceral capitalism’s livelihood. Smith’s video work incorporates found video footage from popular media to confront the language and imagery that feeds the carceral state and fashions the idea of criminality in our social imaginary.

In 1994, Spike Lee began an open casting for his film Clockers, an adaptation of the eponymous Richard Price crime novel. Through this process, Mekhi Phifer was cast in the lead role as Striker, and subsequently began his long career as an actor. That same year, as a comedic bit, Conan O’Brien invited Julie Hagerty as a guest on his late night show, where the soft spoken actress read from the original novel by Richard Price, as if she were participating in Lee’s open call, positioning O’Brien as a surrogate Spike Lee.

“Did I ever tell you the first time I killed somebody,” Julie Hagerty reads as long red curly hair flows around her slender white face. As she pronounces the words, laughter erupts from the audience. Hagerty heaves a sigh, lifts her eyebrows in shock and then bites her tongue to finally fall into a giggle while rocking her head back and forth.

On view in BOLO are multiple video monitors that repeat and elongate the brief eight second clip of Hagerty reading Price’s novel. This most recent video installation focuses on Hagerty, whose character in the film Airplane! is oblivious to all of the chaotic occurrences on the aircraft, and establishes her as a noted comedic actress who specialized in the trope of the naive woman, innocent and unaware of her surroundings no matter how much insanity ensues. In this clip, the image of Hagerty is juxtaposed with the words of character Rodney Little, a drug dealer who acts as a father figure to a crew of “clockers,” drug dealers who are on the streets at all hours of the day. How does the swapping of this language from one mouth to another immediately de-escalate the impact of its violence — shapeshifting it into entertainment — by O’Brien and Haggerty’s design?

Also on view in the gallery are large-scale paintings on enlarged pages taken from a coloring book geared toward children entering and interacting with the court system. This book is used as an educational tool to help children anticipate what to expect in court: from the metal detectors that guard the entrance to the benches in the waiting rooms. Smith has marked the pages with rich oil sticks in defiant crayon-like gestures against the content of the pages. The book defines a judge by the name of “Judge Friendly” who is white with short hair that curls around her slender face and has a Hagerty-esque innocence about her. At times a bird is depicted in the palm of her hand, compositionally referencing images of Saint Francis.

A depiction of a waiting room is accompanied by text that reads, “It is hard to wait,” a reminder that no matter how difficult it is to wait, there is appropriate patient behavior that the child should embody. It asks what 10 fantastical things don’t belong in the picture. In the background a man carries a cake and in the foreground a butterfly flutters across the page. The purpose of this game is to systematically eliminate imaginative objects from the municipal building.

The work on view points to the innocence that is lavished on figures such as Julie Hagerty or “Judge Friendly” while it is slowly guided away from young children. BOLO is the acronym for “Be On (The) Lookout,” used by the police to alert all other units of “wanted suspects” or “persons of interest.” Here the phrase is flipped to serve as a warning against the police themselves. Smith’s appropriation of the acronym also suggests being vigilant against another predator just as life threatening—the language, images, and inherent racial biases in our notions of guilt and innocence. 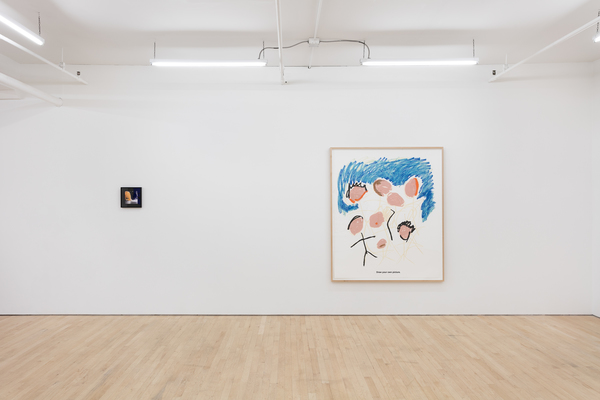 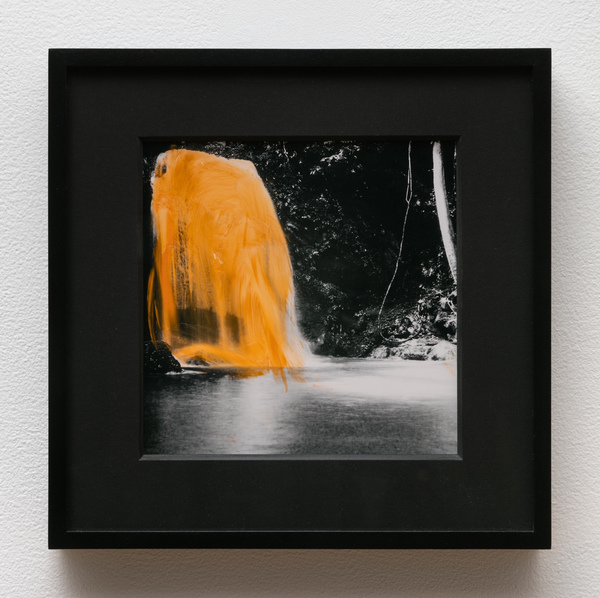 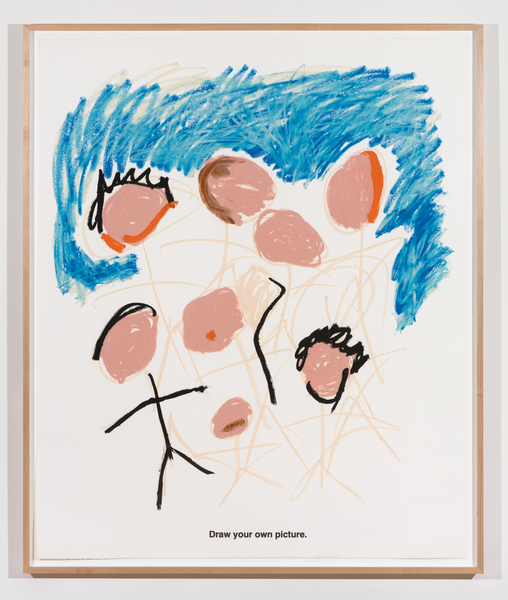 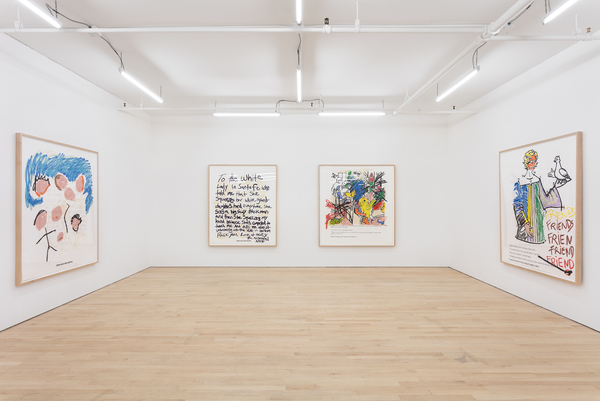 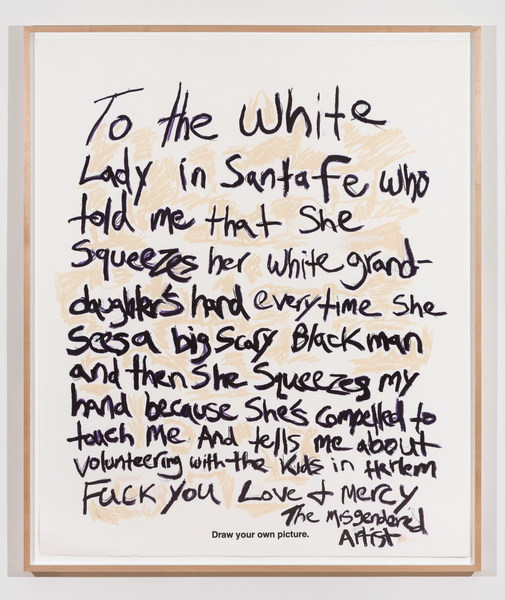 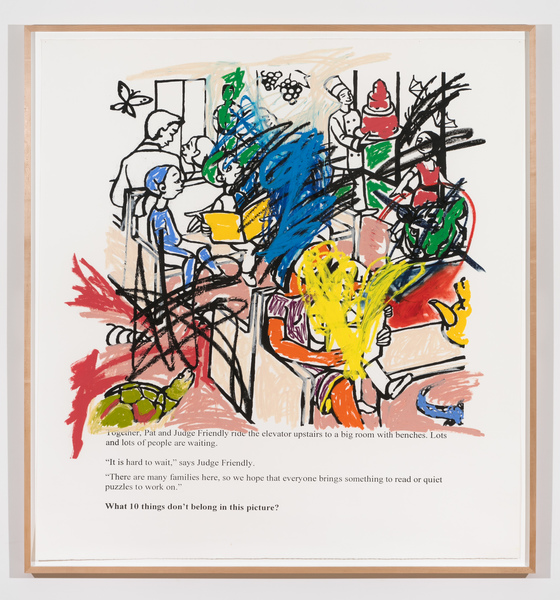 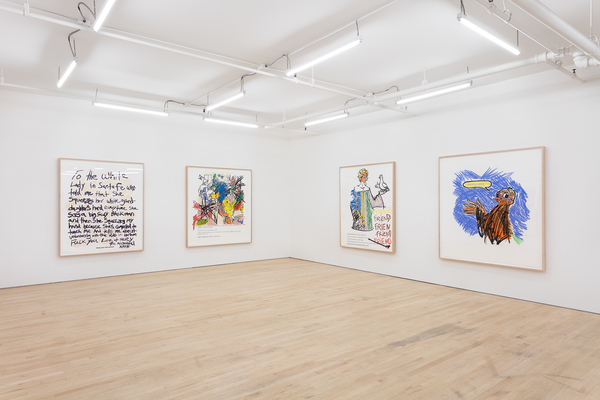 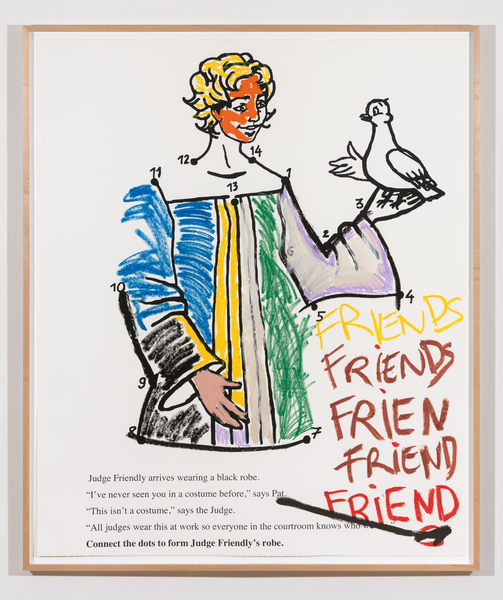 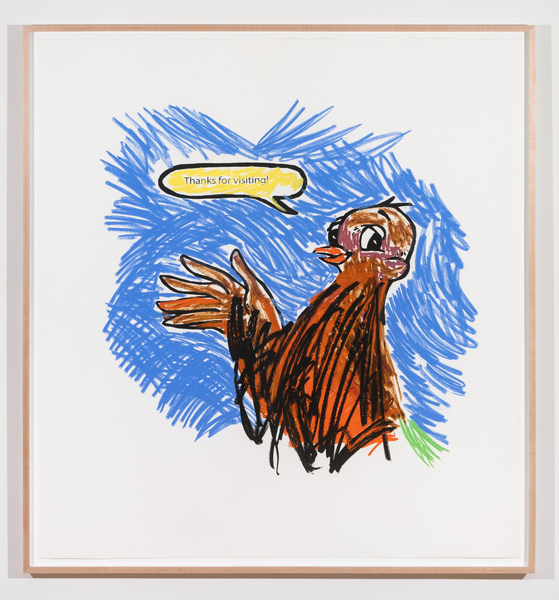 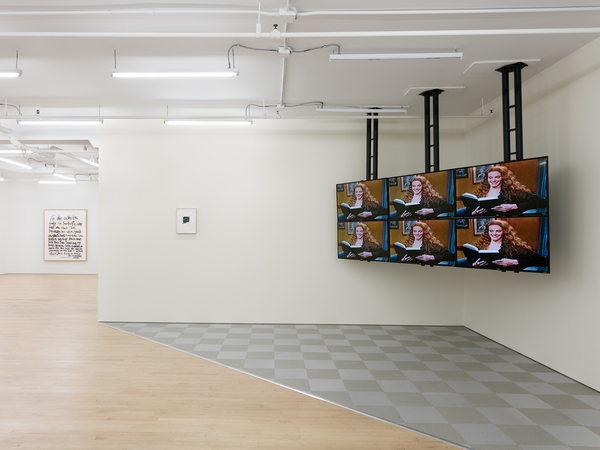 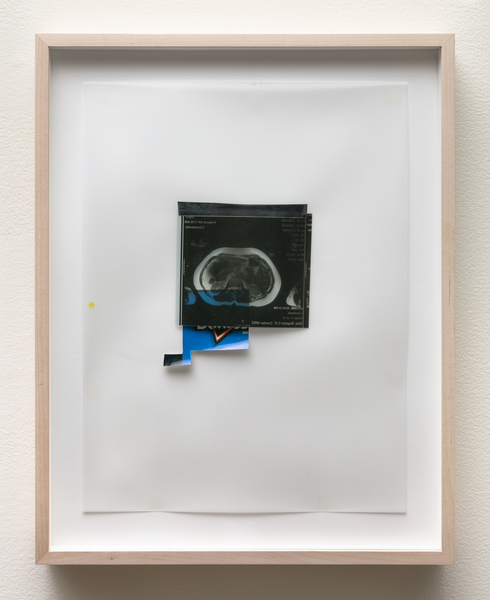 maps for a body thirsty for some other shit, 2018 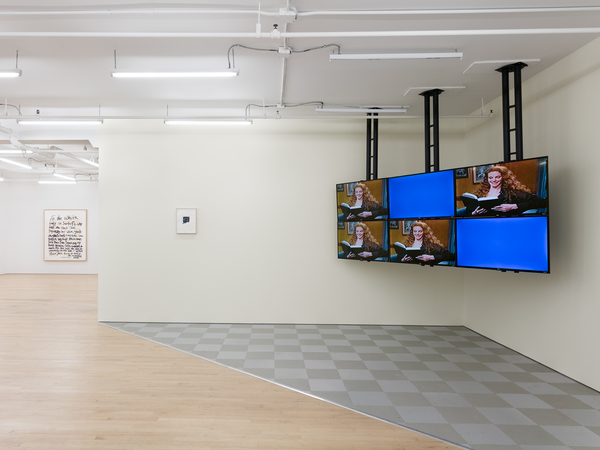 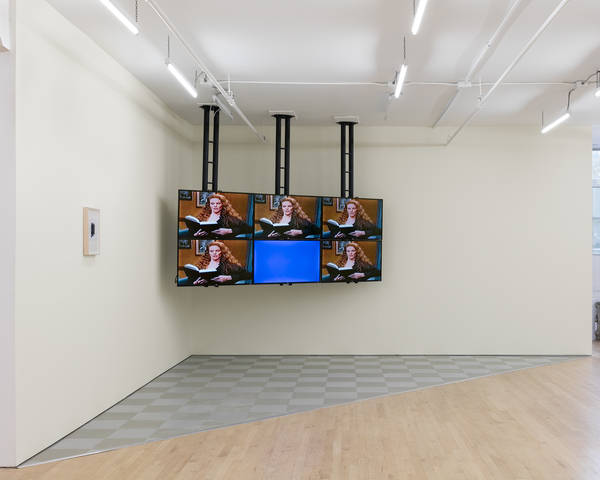 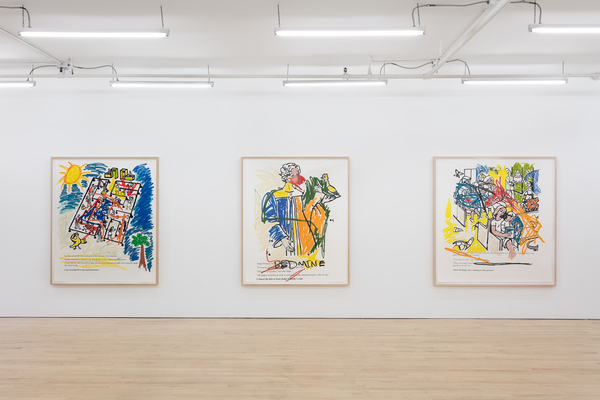 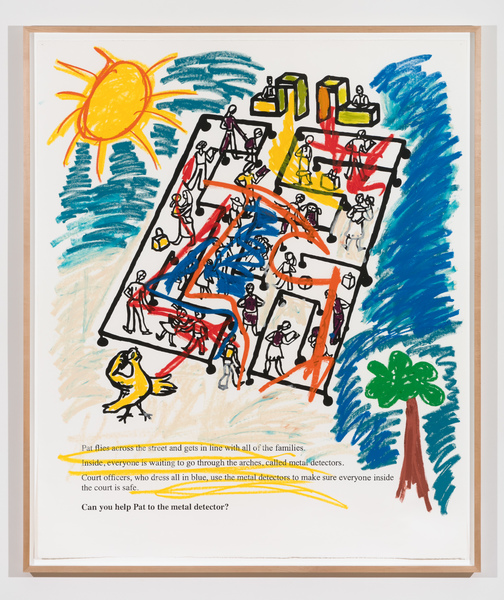 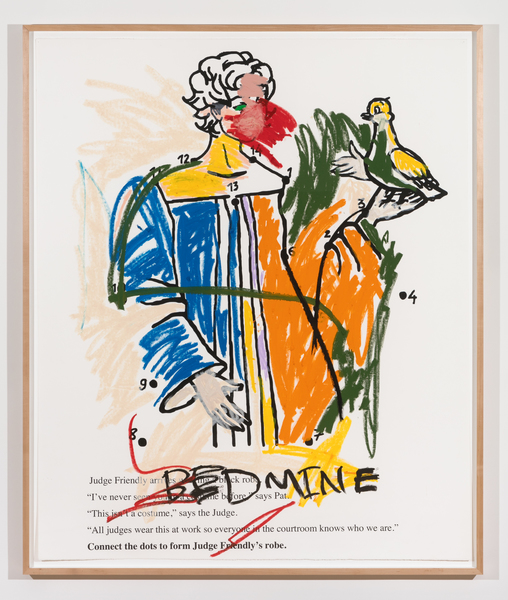 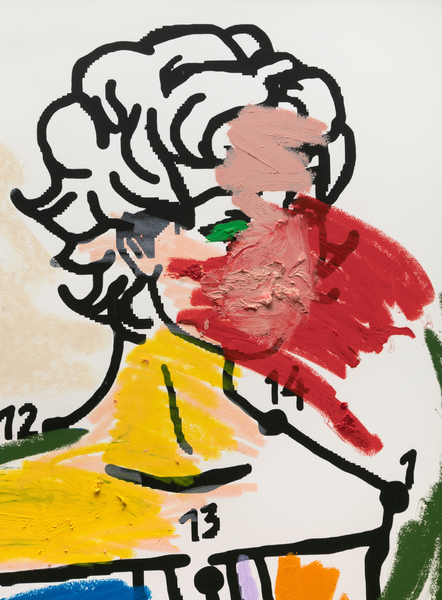 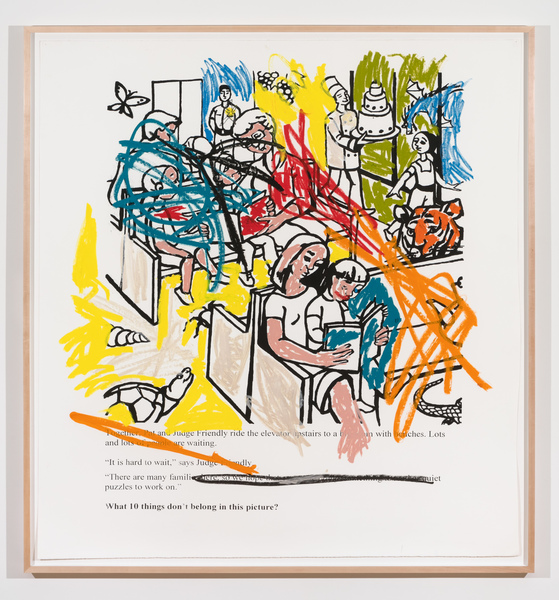