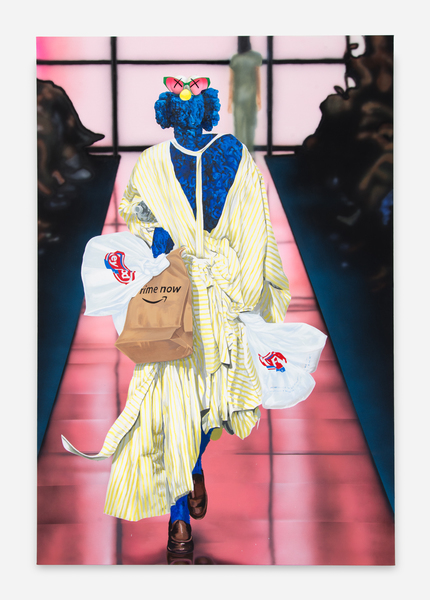 JTT is proud to present Ten Pound Hand, the gallery’s second solo exhibition with Jamian Juliano-Villani (b. 1987, Newark, NJ). Many of the paintings on view feature single figures in sinister environments. While her subjects frequently find themselves in unlikely company, the paintings are not surreal nor are they an embrace of the subconscious. Rather, Juliano-Villani intentionally places one known image next to another in order to create new and unexpected meanings.

October, 2018, features a 3D scan of an infant excavated from Pompeii who is painted bright orange and flying through a school hallway carrying textbooks as if late to class. In the fall of 79 AD, Mount Vesuvius erupted, covering Pompeii with 82 feet of volcanic ash in just under six hours. The town was buried so quickly that detailed preservation of fresh fruit determined it to be from the fall harvest. In October, ash-like leaves fall with whimsy as if to suggest a much more idyllic version of the season than the inhabitants of Pompeii were greeted with. Juliano-Villani’s overdramatic comparison of class tardiness with the destruction of Pompeii is perhaps a wink to her own anxieties being disproportionate to their causes.

Another child protagonist is found in Penis Breath, 2018, a painting based on a storyboard for a cereal commercial. In the illustration, a young boy pours cereal into a bowl beside his sleeping parents who remain unaware of their child’s presence. A smaller painting embedded into the stretcher depicts a possum sucking on a rave pacifier. Stylized after a 50s-era illustration, Penis Breath juxtaposes the supposed innocence of the nuclear family in post-war America with the raunchiness of the painting’s title.

Gone With The Wind, 2018, depicts a firefighter overlooking the recent LA fires. The apocalyptic image is blatantly disrupted by a smaller painting in the upper right corner embedded into the piece. In this smaller painting, a fish playfully pours Coca-Cola into its mouth. The combination of the vibrant, commercial image with one sourced from news media intensifies the unsettling qualities in each.

In a personal reference, custom carpeting at the entrance of the gallery reads “Robbi,” referring to the names of Juliano-Villani’s father and brother as well as the eponymous New Jersey-based printing company that her family has owned since 1978. 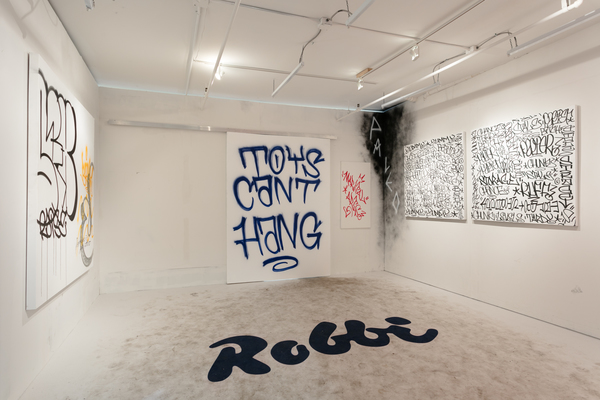 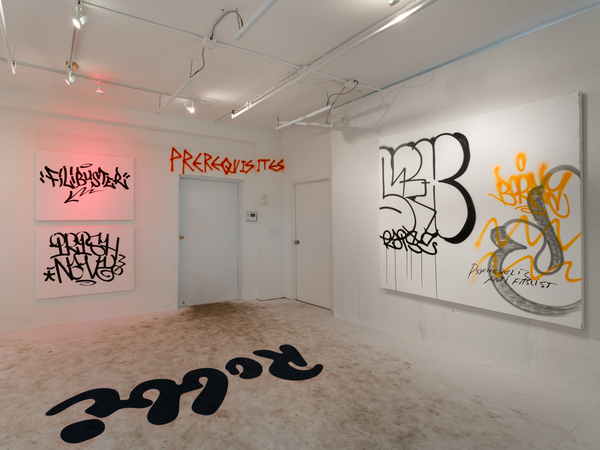 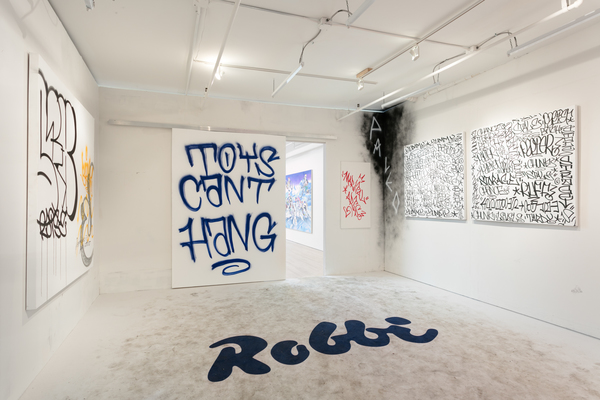 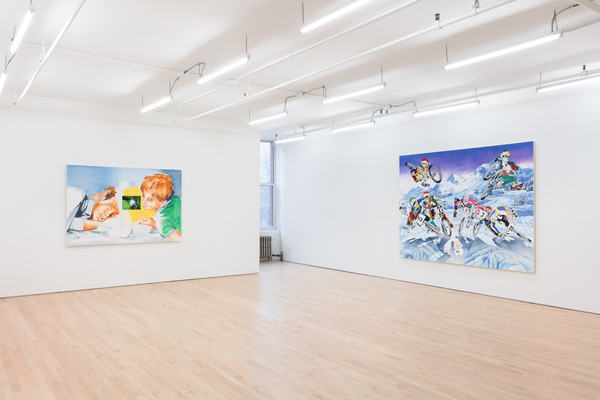 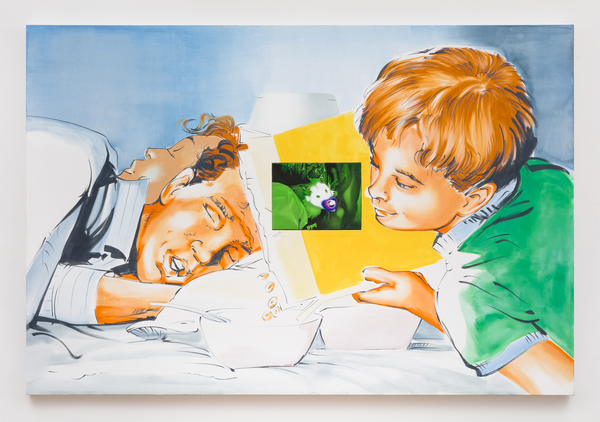 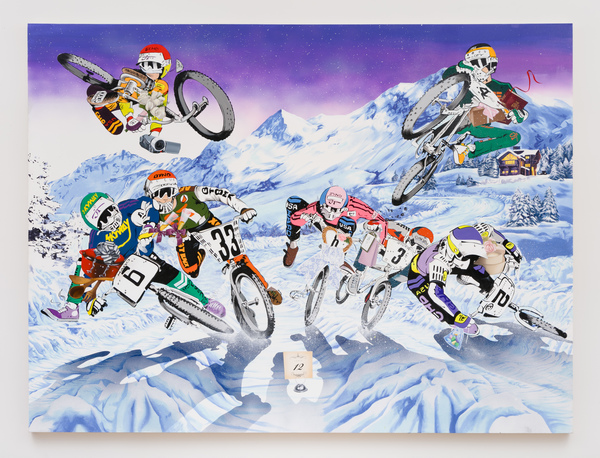 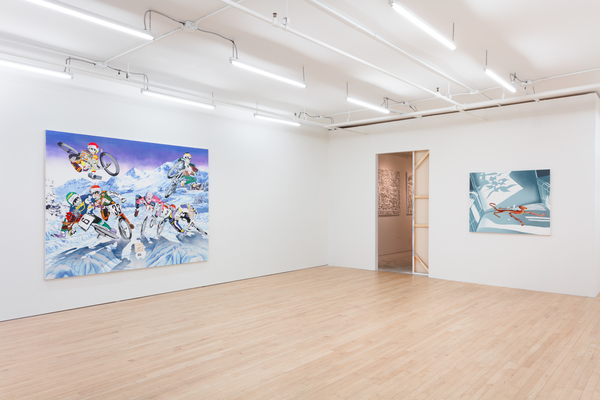 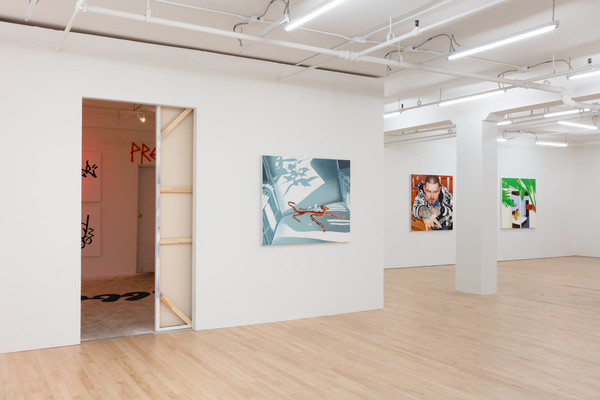 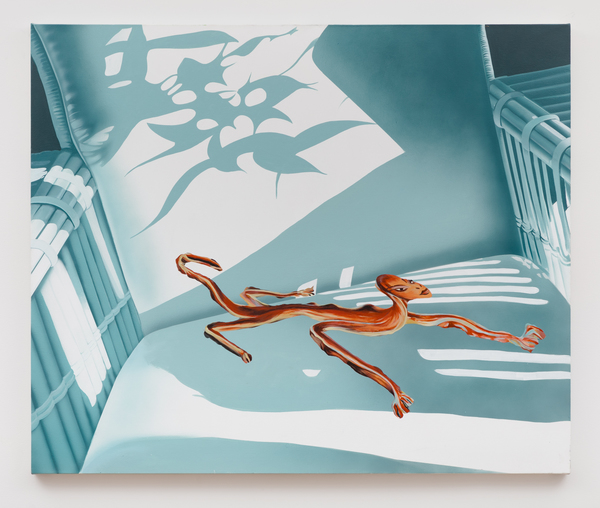 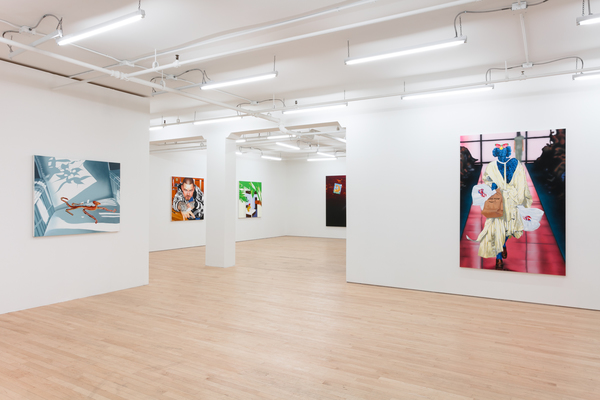 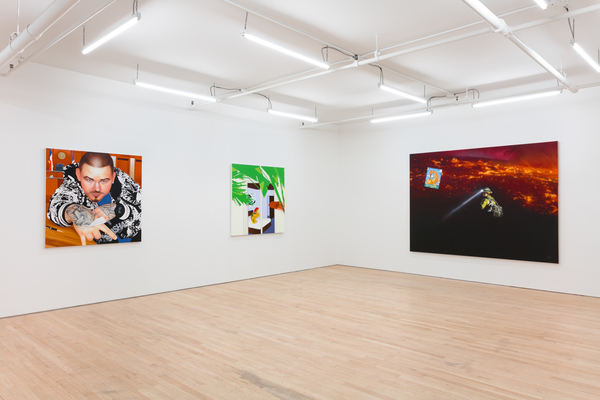 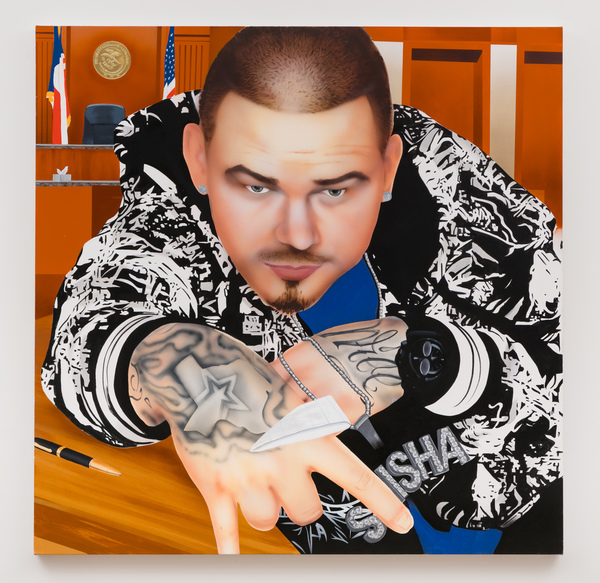 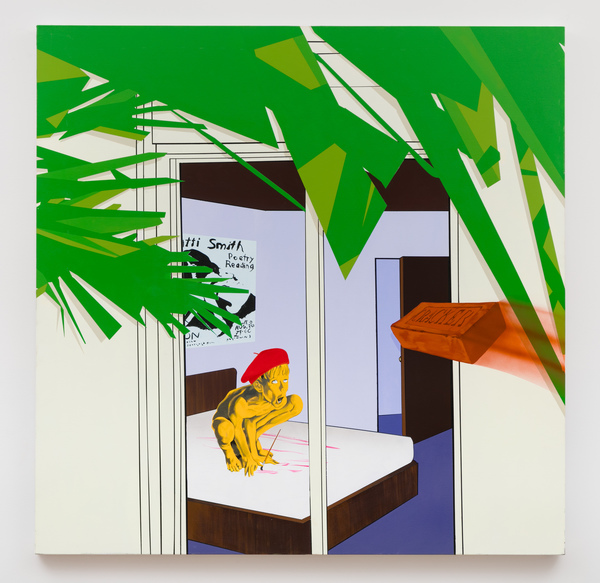 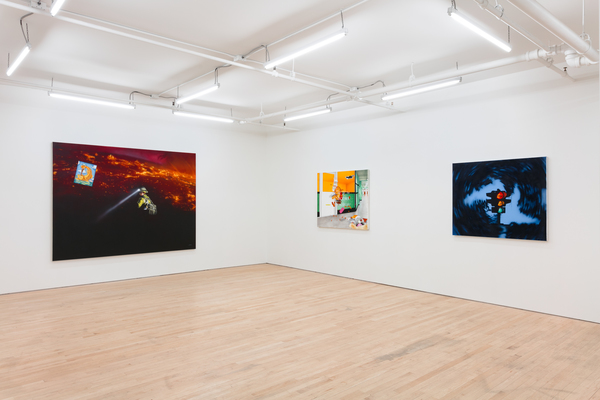 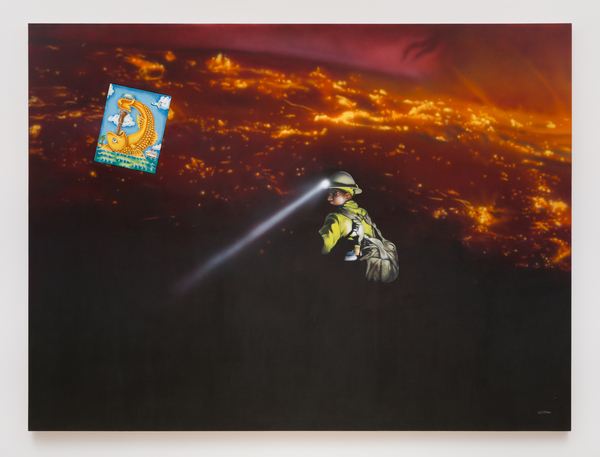 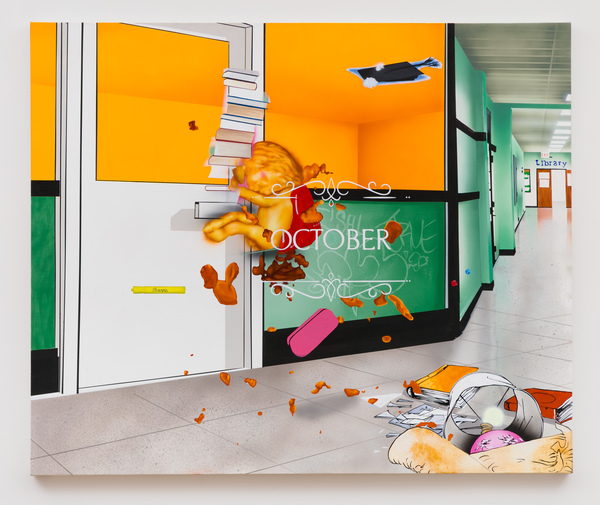 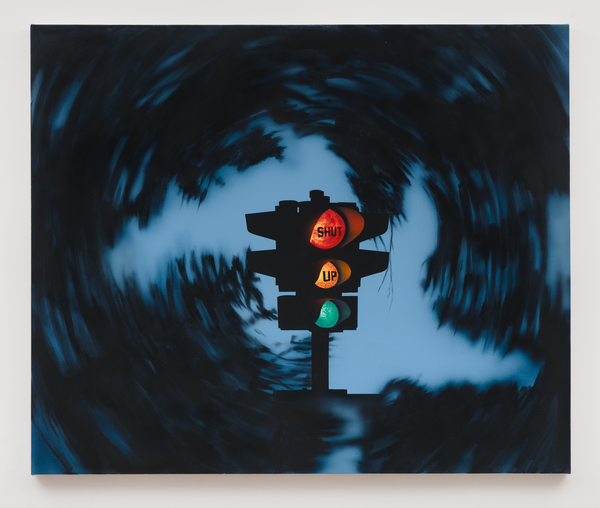 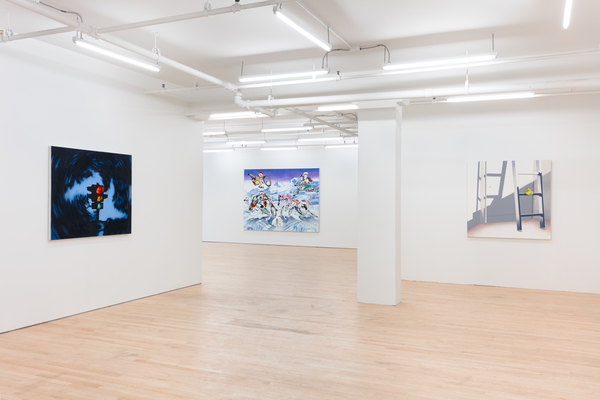 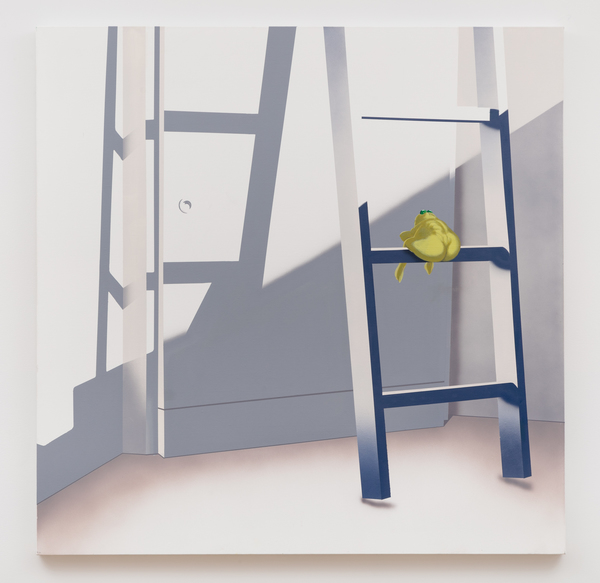