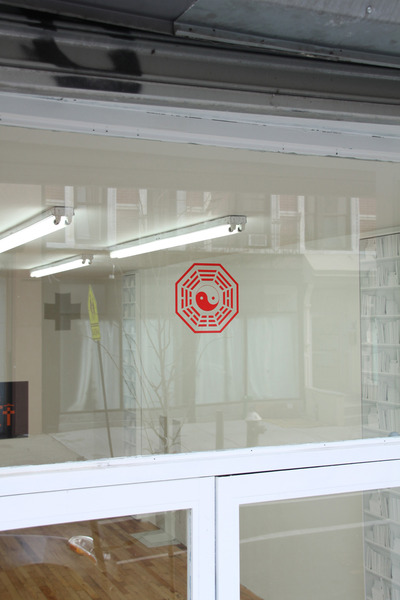 We are made for the sites we make.

In the uniquely long lifespan of an art object, a gallery might be where it spends the least time. Then it goes back to wherever it came from, or somewhere else. Anticipating this movement, it reconciles what is lost, and appropriates what is gained.

If industrial product design is a method of organizing production before it is a method of configuring objects, it is also a method of anticipating the sites they end up in and the demands placed upon them. This process rarely produces a single object.

In gymnastics, a cartwheel is a sideways rotary movement performed by bringing the hands to the ground while the body inverts and the legs travel over the body, coming down to a standing position.

Anna-Sophie Berger’s work is nomadic. It moves from the wall to the body to the floor, mirroring an established model, the journey our own clothing makes each night. Existing as an object on display, an object that can be worn, and in a series of photographs, the work exhibits a fluidity between disciplines and sites. Initially conceived as a couture collection, the current site is not the original. At the same time, clothing provides a mobile context for a person; it is its own site.

Trompe-l’œil (French for “deceive the eye”), is a technique involving realistic imagery in order to create the optical illusion that the depicted objects exist in three dimensions. Forced perspective is a comparable illusion in architecture.

Zak Kitnick’s work, an embossed wallpaper with the printed image of white books on white shelves, is cut and scaled to mirror the architecture of the space (shallow protruding columns and narrow indentations in the wall). As architectural elements, they highlight rather than hide these irregularities. A print of white books replaces heavy volumes with an equal visual density. Here, the image of the object is also its absence. This is wallpaper for the Kindle generation. Rather than adhered directly to the wall, on panel and linen, it’s wallpaper you can take with you. Infinitely repeatable, it could always be longer or shorter, an endless column.

A bouillon cube is dehydrated stock formed into a small cube about 15 mm wide. It was typically made by dehydrating vegetables, meat stock, a small portion of fat, salt and seasonings and shaping them into a small cube. Bouillon is also available in granular form.

Sean Paul’s arrangements are two-dimensional stand-ins for three-dimensional objects. Extrapolating from a four-piece camera system (i.e. lens1, camera body, lens2, flash), and enforcing the generative potential of documentation, Paul’s “objects” become surface information which goes through a process of folding and unfolding over new surfaces, resulting in visual data both lacking and in excess of the “document.” They are stand-ins as much as abstractions, deconstructions as much as constructions. Complimenting these arrangements are additional works that negotiate the folding-in-and-out of site via a consideration of that which informs folding: the fabric, the form, and the pattern (from the Middle English ‘patron’). These works-as-pattern-forms, model themselves after the form -or ‘flat’ -of blue jeans (e.g inner and outer fly), and the ‘repeat’ of denim twill; loci from which other loci can be replicated. Working backwards but with a similar logic, producing the “flat” in place of the “real,” Paul’s work takes place in the relationship between an idealized geometric object on the wall and the textile object worn upon the body. 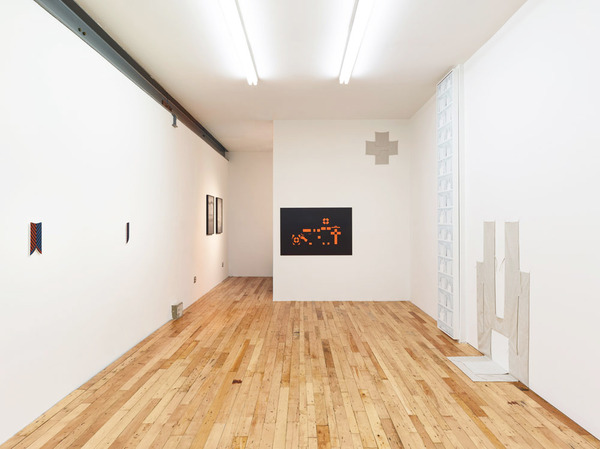 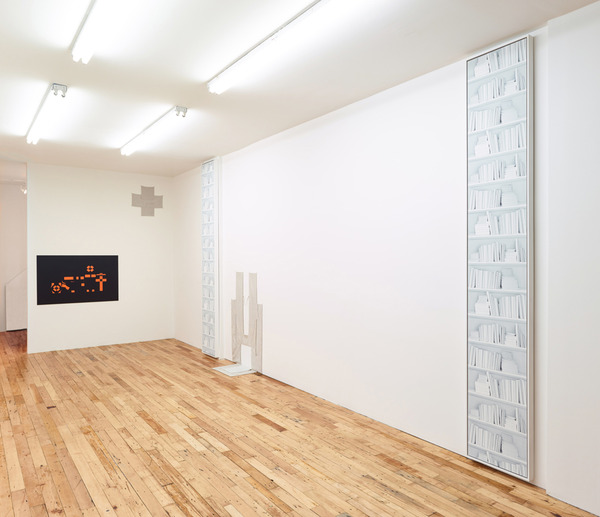 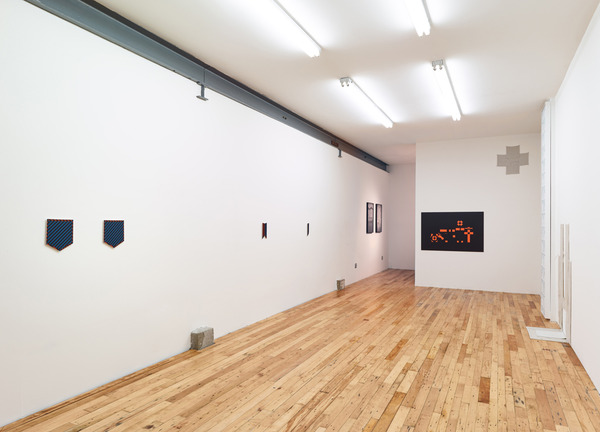 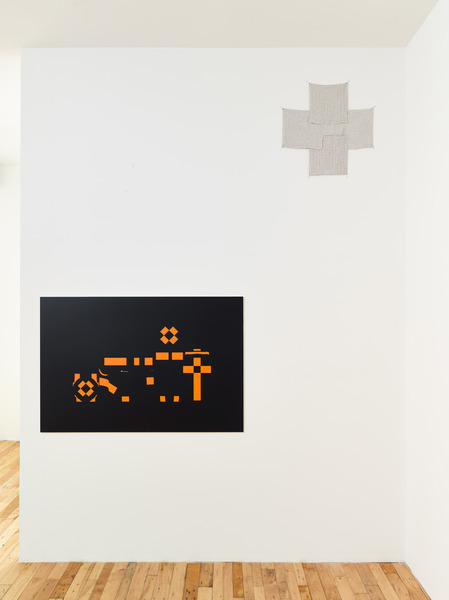 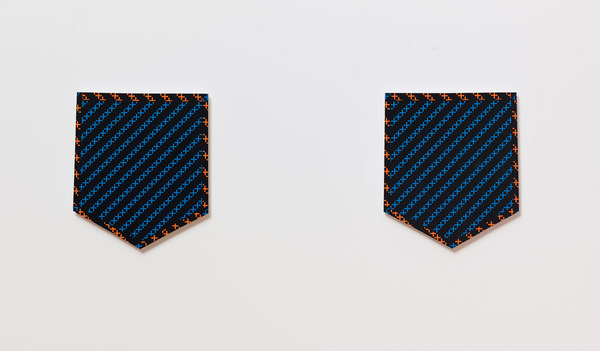 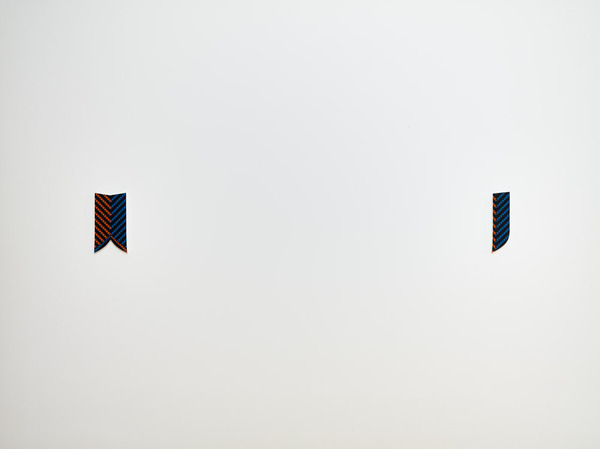 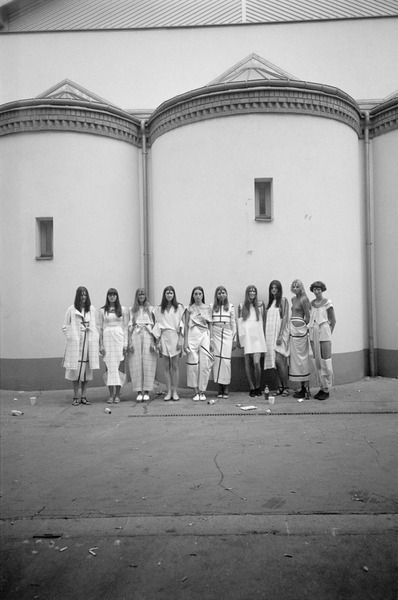 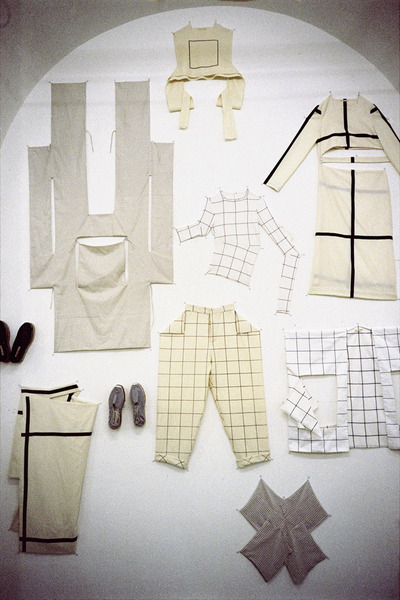 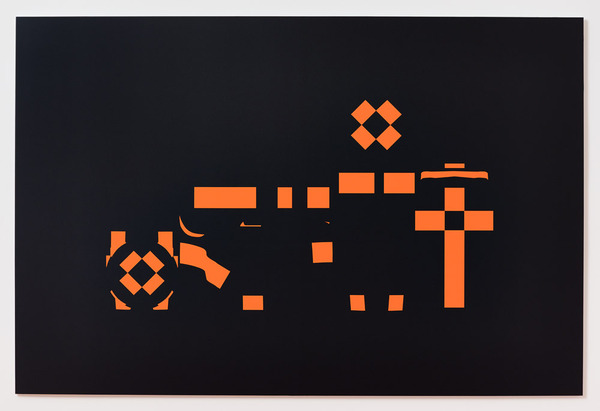 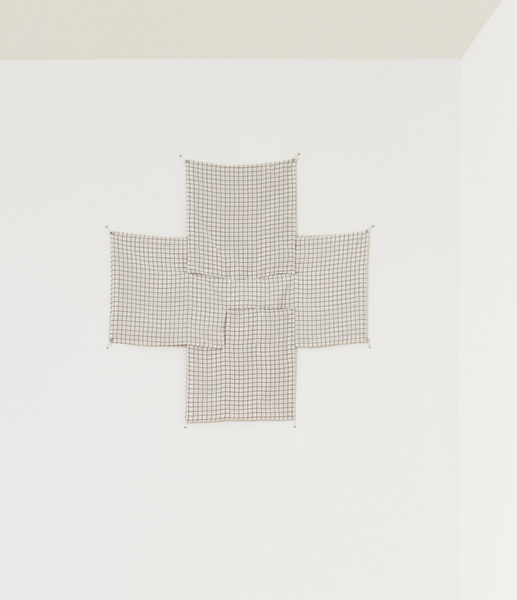 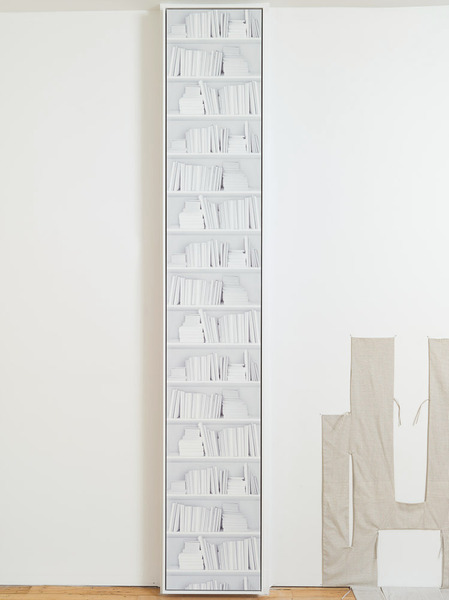 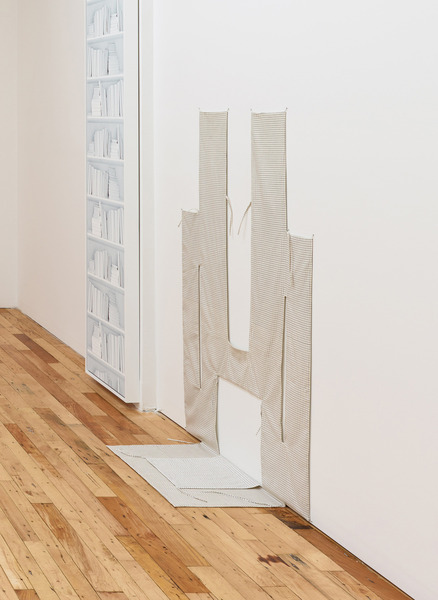 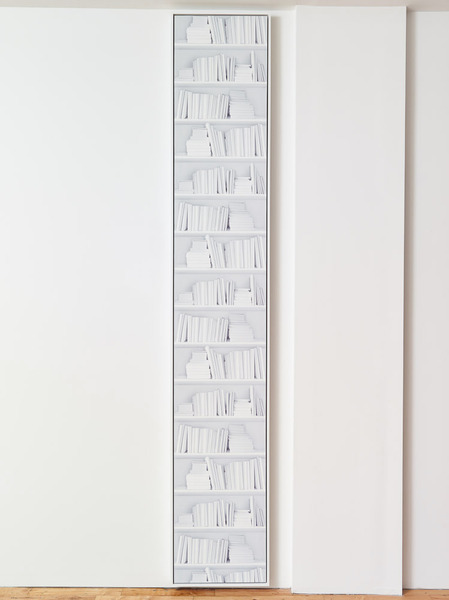 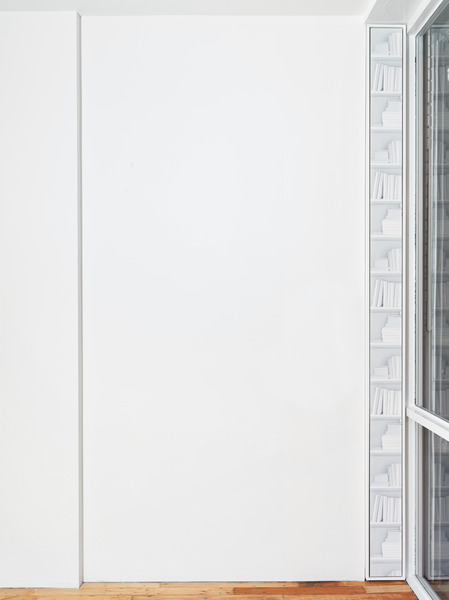